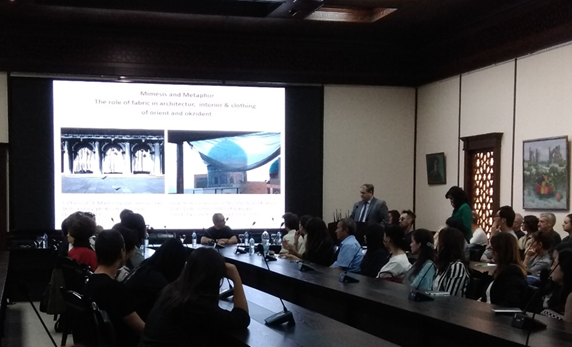 In the Central Exhibition Hall of the Academy of Arts
of Uzbekistan Swiss Professor B. Köhler held a lecture on the topic:

“Mimesis and Metaphor. The role of fabric in architecture, interior & clothing of orient and occident”.

As we know, art is connecting link between whole humanity, which speaks in different languages. Hence, art linked orient and occident. Relationship and interaction between architecture and fabric in given countries discussed on the lecture.

– New interpretations of the relationship in History
between ornament, textile and architecture in Central Asia

– An Occidental theory of textiles and architecture:
Gottfried Semper and Adolf Loos and the principle of clothing in architecture

– The practical handling of fabric, mimesis, and metaphors in Occident and Orient

During the lecture given examples that show us how the eastern and western architecture used patterns and ornaments taken from textile objects. For example, the Samanid’s Mausoleum in Bukhara is a vivid example of the creation of building materials – bricks, ornaments, similar to the ornament of carpet products.

In
Europe, tapestries and carpets used as part of the architecture or interior.
For instance, carpets adorn the floor and tapestry – walls. The tapestry used
to separate different parts of the house; therefore, the tapestry turns into a
kind of wall, but from soft material – the theory of Gottfried Semper – the
largest German architect of the mid-nineteenth century.

Folds on fabrics in the constructions of facades of
buildings.

In addition, textile products have been considered as a covering canopy, as a whole building, temporary dwelling made of fabric, quickly erected collapsible structure – tent.

“There is a crack in everything, that’s how the light
gets in”

We express our gratitude to the Embassy of Switzerland, Academy of Arts of Uzbekistan and the Department of International Relations of the National Institute of Arts and Design named after Kamaliddin Bekhzod for an interesting lecture with the participation of professors, teachers and masters.