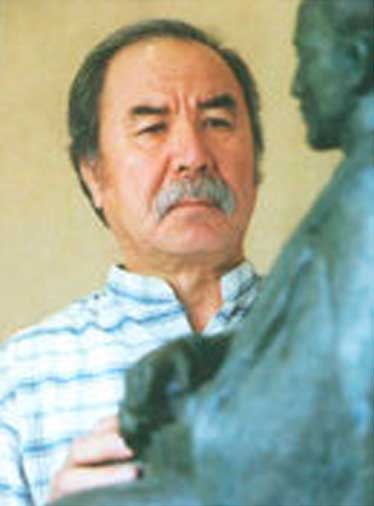 Ilhom Jabborov was born in June 30th, 1945 in Urta Chirchik district. After receiving 8 years of school education in the Olmos village, Ilkhom entered the theater art school in Tashkent in 1961.

For four years, the famous sculptor has been trained in the Department of Theater Dagination at the Benkov Art Institute.

After graduating from theinstitute, he will be granded the resolution to the Namangan Theater and gets a job. In 1966 he will enter to the sculpture faculty of the Tashkent Theater and Art Institute. Here he was tought by famous sculptor Anvar Akhmedov. In 1971 he will graduate from this institute.

Ilhom Jabborov has been working as a teacher at the Republican College of Art since 1995. Since 1997, he has been the sculptor of the sculptor workshops at the National Institute of Arts and Design, professor, academician of the Academy of Arts of Uzbekistan (1997), Honored Art Worker of Uzbekistan (1989), “Mehnat Shuhrati” (2001), State Prize Laureate. By the Sculptor in Tashkent (1993),Samarkand (1996), Shahrisabz (1996) were created monuments devoted to Amir Temur, to Akhmad al-Ferganiy in Fergana and Kuva (1998), Jaloliddin Manguberdi in Urgench (1999), “Mother Motamsaro (Tashkent, 1999), Ibn Sino (Belgium 2000), Nizami Ganjavi (Tashkent, 2004), Bakhtiyor Ota (Tashkent, 2005), Abdulla Kahhar (Tashkent, 2007), “Ancient and eternal statue of Bukhara “(Bukhara, 2010) kinds of monuments were  set up.